We’re doing some improvements to the backlinks feature in RemNote to make it aesthetically pleasing and more intuitive for new users.

If you have 2 mins, please complete the missions in this UI Test to help us improve the backlinks feature.

I did the UI Test but didn’t leave written feedback, so I’ll leave it here:

What’s wrong with backlinks now? The popup could be made less ugly and more legible, but the current solution–the small box with the number of backlinks–is a lot nicer than the proposed changes in the test. Please don’t clutter up the interface in order to make it “friendlier.”

Since there was no option I like presented, I’ll just type up my suggestions here.

As far as expanding hidden children, the entire system around that is so mysterious at the moment as to make the specifics meaningless - I’m fairly certain 99% of people don’t hide rem manually, preferring to fold, and get surprised whenever that text pops up. I would return the old behaviour of showing the number of hidden children directly under the parent rem rather than stuffing it at the bottom and using only the fatter bullet with a downward triangle on the parent as an indicator that not everything was unfolded.

I couldn’t agree more with the “toggle on the left” set up. As you say, it’s what we’ve come to expect for every Rem, so why would the References be any different?
As for the hidden children, I still don’t understand what this is for. It feels like someone else has been editing my work which feels invasive. On top of that, it does not appear consistent, so I find myself unhiding everything just to see what was hidden. Maybe there’s an explanation for it, but I’m yet to see that described anywhere in a way that I agree with, or how to turn it off.

Hi, @andresleon. I would like to provide some improvements to the rem reference.backlinks. There are two types of rem references.

This is the second type

With this type of rem reference, you can write down ideas about the theme whenever and wherever you want. The main purpose of this rem reference is that you can view your ideas via backlinks in the theme page. 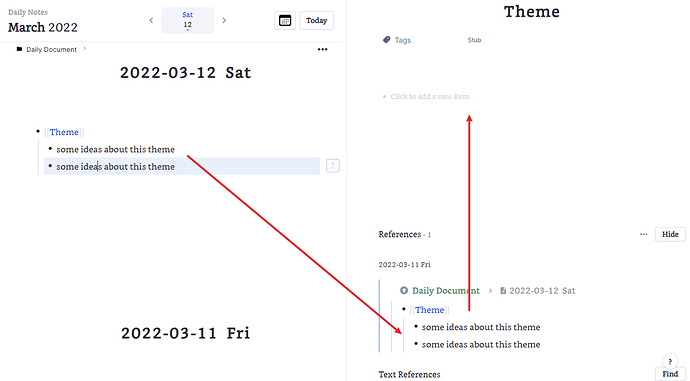 But there is a problem here. This is backlink of the rem reference in RemNote 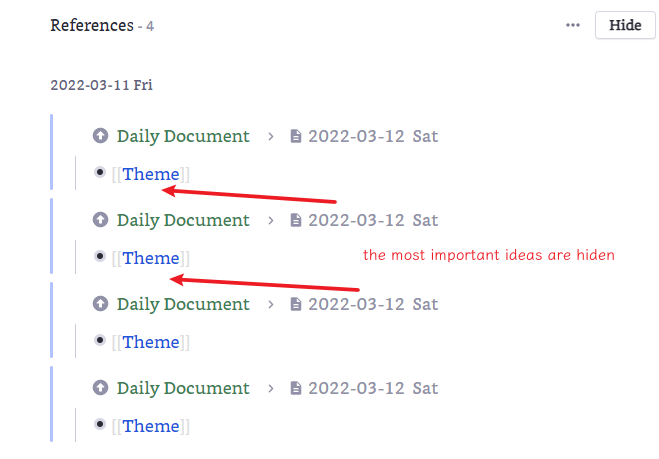 You can see that all the backlinks are only shown at the [[Theme]] level. This presentation doesn’t provide enough information, and the most important ideas are hidden

For this type of rem reference, you have to manually expand it each time to see the notes in it

You can refer to Roam Research for improvement of backlinks, they do a good job. They distinguish between types of rem references, and display differently in backlinks