Firstly, the update sounds nice but in my documents folder, a whole bunch of portals to random stuff got created after this update.

Not being able to multi-select the documents and process/delete them is also somewhat annoying. 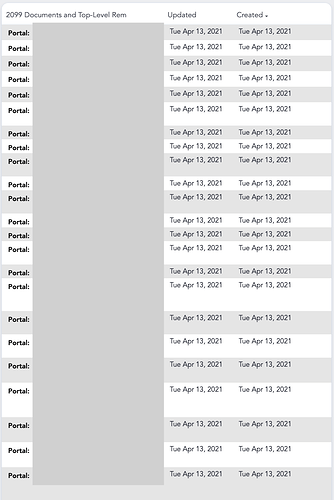 @marcothesis thanks for sharing. Can you describe more about how this happened?

When I logged in to beta and view my documents, they just popped up there.

I agree that being able to multi select items from the documents table will make life so much easier as it can function as a quick fix for many of the issues.

Are you able to find out any pattern here? What are these portals, like are they custom search portals that you had created previously or are they newly created ones, if so what do they contain?

They are all newly created after the update as you can see from the columns. These contain portals which typically have some tags that belong to some slots. When the portals are clicked on, they disappear, leaving behind an untitled rem.

By the way, I am not sure creating a separate bugs category under beta server make sense. I think we just want to give feedback or report bugs specific to update batch or version. These are meant to be transient feedback or reports anyway.

Otherwise, you will have many people reporting their own bugs here in different topics and you are not even clear which update trigger it. This can get messy real fast and not to mention, duplicate the bug reporting efforts on the general forum or github?

Suggest each update gets a new thread and relevant input gets fed under for easier review.

Yes I sort of anticipated this, this category is makeshift for now.

Sorting all topics based on release is a good idea, but I think a single thread would be too noisy to handle multiple bugs/ feedbacks to improve features.

What if we had temporary sub-cateogries named after each beta release and then we can have one topic for each bug/ feedback?

Once all the bugs have been fixed, this sub category can be unlisted, hence keeping everything clean.

thanks for reporting this.
CC: @Martin

They are created from the grouped search portal. Compare

Part of the problem could be syncing back from the beta server (potentially new database schema) to stable (potentially old database). Here the search portal groups are added as top-level portals.

Can someone check if this happens if you disable wifi first? I.e. is it the problem of syncing the search portal groups to stable which creates the top level portals which are then synced back to beta or do these portals get created in beta itself?

I initially thought it could be as @Hannes described, beta database screwing with stable database. So I gave beta a second chance and quit all the other stable versions.

Amidst using the beta server, I highlighted the background of an alias of an existing tag. Expand/Collapse the sorted portals at the bottom of the tag. Then I checked the documents section and there they are, those top-level portals spawning like zerglings. They are similar to the contents of the sorted portals I visited earlier but there are more which I can’t tell where they came from.

These uncalled for portals number more than 100 so I hope there’s a fix soon to retroactively deal with the mess created. For now no more beta for me as we are supposed to be productive using RemNote, not wasting time dealing with the output of bugs.

Thanks for the report! This issue has been fixed on the beta server. These erroneous portals will be automatically removed if you log out, and then log back in.