Problems with the Anki exporter (and how to fix them)

I’ve loved RemNote ever since its inception, but the Anki exporter has always really bothered me.

At the most basic level, everything is coerced into the format of a Basic note, which makes the resulting cards very inflexible.

Cloze items in RemNote do not export to Cloze cards in Anki. I would guess that the fixing of this problem would go hand in hand with addressing this previous feature request.

When I export a document containing lists, the list is revealed as a whole on the back of the Anki card, whereas in RemNote it would be revealed piece-by-piece. It would make much more sense if Cloze Overlapper was used to power list cards on export, and in turn, features similar to Cloze Overlapper were made available for memorising lists and sets in RemNote.

Also, the Image Occlusions in RemNote don’t actually export to an Image Occlusion type in Anki. Again, fixing this would likely tie into another previous feature request.

It has also been mentioned before in this forum that the formatting is quite wonky - at the very least, the exporter should have some custom CSS on the card template to fix this. For comparison, one might want to look at the CSS of notion2anki exports.

These are just my ideas for how the Anki integration in RemNote can be fixed to reach a better, more usable state.

Any of the problems were addressed and fixed? I also would be interested in good Anki exports.

Same query here. I need to be confident that I can switch back to Anki anytime if I have to.

Hi! When I use the anki exporter, it keeps the formatting, but it looks wonky on the anki app. Is there a way to remove the bullets, indentations, and general formatting but keep the lines?

So it would just look: 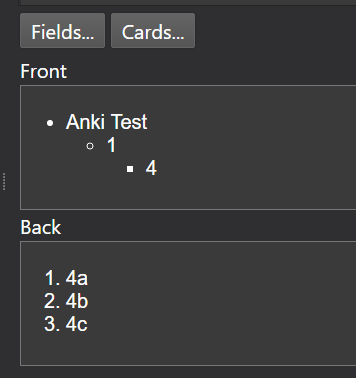 The fact that I cannot export my notes from remnote without losing my photos is significant enough for it to be a deciding factor whether I should use it or not at all.