Collecting Feedback for Sync or Performance or Stability issues

Hey everyone! We are doing some core changes to the app, and we would like to fix all existing issues relating to odd sync behaviors, performance problems in some machines or any unstable crashes/ errors.

Kindly use this thread to dump all the information you could possibly give us regarding your experiences with the same or link us to other’s feedback if you can find them anywhere.

Thank you all in advance! Happy Learning!

@moderators if you could also help by collecting/ aggregating existing feedback from other categories/posts that would be extremely helpful.

A daily issue is failure to index some rem for full-text search, workaround is manually edit the rem, which will force it to be re-indexed. See full merged thread.

Using the browser-based version of RemNote, there are Rem that I have already created, and exist in document list, yet when I use [[ to add them in another area, they are not found. I can create them as new REM, but then they are duplicated. Interestingly, they registered fine on another computer (in the browser version) and once I opened that version, the REMs showed up, finally on the first computer. I have had this happen before.

I also have some older rem that are mistakenly thought to be in their old location - if navigated to from search or reference, the old location’s document is opened. No workaround found, tried editing the rem and moving them other places.

Rarely, portal backlinks are shown even though the rem are in a single document, possibly related to moving them.

These are all on the web version, I’ve tried hard reloads and logging out and back in to no avail.

After importing my Knowledge Base from Obsidian into RemNote, the app considerably slowed down. It took ages to load notes (up to 10 seconds, in fact, but this is still very far from snappy and responsive). Every change on a given text forced me to wait for RemNote to catch up; then I could press Enter or enter some characters… only to have to wait again. Not to speak of the search functionality…

When I deleted to whole database and started anew, I left out all attachments which originally were in my Obsidian Knowledge Base - pdfs, images, but also emails, sound files, excel files, and more. This worked and RemNote could, after a second import, process all the 3’300 markdown files and made roughly 42’000 rem out of it… but generally now worked fast.

It would have been very nice (and would have saved me hours of trial and error), if

(That said, though off-topic, the import- and export functionalities of RemNote still need much improvement. For example, data which is not text - for example word files, pdfs and all the other formats which would be very nice, if I could import and use/linking them via RemNote - could be exported in their original form. In that way, once I make a backup, I potentially have all the imported files outside of RemNote again, in their original form. This is a very important functionality for me, as I need one place to turn to for daily work… but at the same time need to work outside RemNote on the files, e.g. when working on an excel-file.)

I’ve just found remnote (congrats, the sheer amount of creativity is impressive!).
I like named edges! it shows you guys are serious!

I have imported my notes from zim (my fave tool) to markdown, and then into remnote.

I find remnote extremely slow with 3400 notes from zim. Clicking on ‘documents’ takes a few seconds. 5 sec for even tiny notes. Highlights and images are lost in the process, but that’s a minor annoyance.

On browser, remnote is simply unusable. On desktop, it’s painfully slow. Because this is a foundational issue, I have to ask: will remnote become faster now after funding and with a bigger development team? Being electron/web I will never expect it to be as fast as zim, a pure desktop app. In fact, typing latency (as measured with typometer by Pavel Faltin) is around 40ms vs 5ms in zim! But that’s a tradeoff for the convenience of electron. I’m talking about the speed of:

I’m not even worried about search here. This is the basic blocks.
I’d love an honest answer; if things will not be faster anytime soon, that’s fine. I can think of other uses, and I can leave behind my 3400 notes.

Maybe this helps (and at the same time it may be good feedback for the devs):

If you do sth. like this in your sidebar…

… and you have those entries added to your sidebar… then RemNote really becomes superslow.

The solution for me was to have those documents pinned (see screenshot). You can do that by changing the document’s status and then arrange to your wish.

Thanks C,
I love how you found a workaround. But I have 3400 of those

not likely I can pin them by hand. Even if I did that and solved the issue with clicking notes in sidepanel, every basic action is still very slow:

Slightly better on the desktop app. But since sync seems to not work reliably, not a good solution…

It sounds like something went wrong with your import, or is going wrong with the sidebar as per Chinchivi’s suggestion. Would you mind directly getting in contact with support by using this option in the lower right ? button? Include the link to this discussion from your initial post downwards. 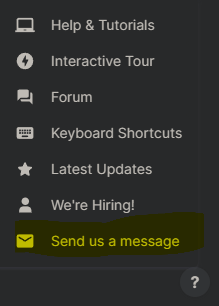 Since this thread has been bumped, I’ll mention this yet again because it’s been really annoying me lately: the flaky cursor.
It loses focus. It jumps around. It turns invisible. It refuses to show up at all.
Just search for “cursor” in this forum. I don’t think the RN staff has ever given a response to any of these complaints.

I would like to see that the knowledge graph becomes faster.