Creating concepts with ":=" instead of capital letter (which is prone to undesired results)

I think it should be changed with an intentional marker instead of Capital letter, to avoid current problems:

By principle, IMO, the concept vs descriptor framework deserves an intentional, non-ambiguous input method, that isn’t case-sensitive, as sometime case sensitivity is useful for what we put in our knowledge base.

I suggest “:=” vs “::” but there probably is a better looking (less ambiguous visually) way to do so.

I hope my request make sense

Concept := this is the concept definition
3 properties :: these are the names of the 3 properties

Additionally: When you are German, you are likely to use substantives for either thing - and substantives in German always have a capital letter in front. So the whole concept-descriptor framework by starting letters doesn’t work in German at all natively (my workaround is to use the article - der, die, das - for descriptors but that’s somewhat odd).
Though there might be also a keyboard shortcut for descriptor and concept, but am not sure .

IMO, that would be a good enough reason to switch to an intentional marker instead of capital letter 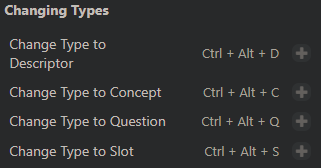