Hi,
I’ve been an enthusiastic user of Remnote for about a year now, and (though I’m very picky about paid services) went pro without thinking twice.

The product often has bugs (small and large).
This reflects a philosophy prioritizing growth/features over stability.
IMO - that’s fair for the stage Remnote is in.

What is frustrating though, is it feels the support does not rise to meet the demands of the growing app.
Specifically- with Bugs & Feature requests.

Currently - there are no less than 4 locations for bugs (similar for features):

I raise these issues not to complain, but because I’m genuinly invested and want the product to keep getting better!

And while growth is important - I believe this is not only good, but necessary, to keep existing users over time.

But maybe it’s just me

I’d love to hear other’s impressions on problems and solutions.

The only approved location for feature requests is the forum.

Also there is a roadmap on the remnote help section. It’s a little bit hidden though, just found it by accident 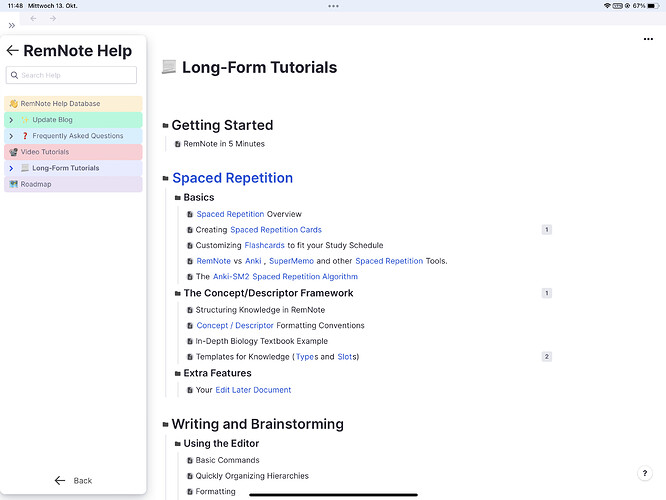 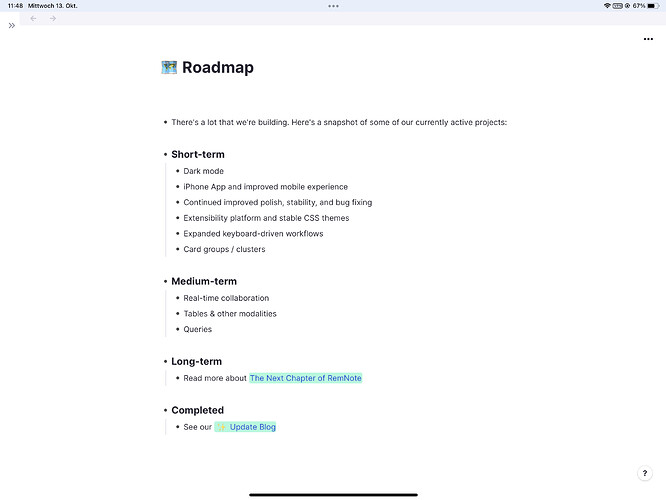 I think you raised interesting points:

However, I’ve very please with the fact that the RemNote team has integrated core changes demanded by the community. One example is abandoning forced capitalization for concepts, changing the cards’ schemes with arrows etc. I was very surprised with that

This leads me to think that the problem you raise is almost entirely a communication issue.

It would be really nice if there’s a changelog of versions in the discord. I’m lurking in the Obsidian and Logseq discord, and they have changelog channels.

Absolutely. I’ve seen a few bugs I reported magically fixed after a few days., and realize the team works hard to develop and maintain remnote.

But in these cases there’s often no feedback to the reporting user or for archiving (where someone googling can reference for regression etc).

In other cases smaller bugs can just get lost in the discord (or github) without being addressed.

My point is not about the amount of bugs fixed or features implemented- rather that it seems the channels of communication for these are not organized to be beneficial for the community, nor the team.

As you say, it’s absolutely about communication

I thought this was a well-summarized piece on the state of Remnote. Personally I don’t even log bugs or feature requests anymore until the existing ones are being actively fixed and I don’t even visit this forum anymore to see what’s the update on those bugs since they don’t seem to be attended to. If it wasn’t for Discourse’s email digest, I would not even have seen this post.

This reflects a philosophy prioritizing growth/features over stability.

I get the sensation that Remnote is having funding issues. It appears that they want to grow and expand, but the application itself is not stable enough to roll out in mass.

I am also optimistic for Remnote’s future, but again - I couldn’t agree more, they need satisfy existing customers and bugs before expanding demographics or features.

Your post resonates with me and you put into words everything that bothers me about using remnotes.

I believe we should look at the big picture and the larger point of the author here rather than find exceptions.

I get the sensation that Remnote is having funding issues.

If fact, the opposite is true, going by the the 1.4 livestream: the funding is there, it’s just the vacancies aren’t getting filled. There is even a $2000 incentive for anyone who can refer someone who will fill a vacancy. Presumably, the most crucial one at the moment would be “Talent Sourcer”.

Most excellent! I apologize for my misconception of the situation. I will keep the incentive in mind. I am hoping for the best for Remnote, for, I am using it for Law School - So I need it to work and for at least a couple of years - I invested in the Pro Plan.

I look forward to any updates. Take care for now.

I really love your perception and your ability to communicate them precisely. This post couldn’t have come at a better time.

and I can confidently commit that I now have a solution to deal with these communication hiccups.

On a higher level this is what you can expect from us:

We are in the testing phase currently making sure everything works well together, and will begin implementing everything soon.

Thanks for the wonderfully thought out post, it validated my concerns and also aligned with my solution design.

I really hope this happens soon. I’m lurking in discords of Obsidian and Logseq, and I notice there is so much more interaction there than in Remnote’s discord. I think partly the regular release of updates gets the community very excited and gets people to talk a lot more. Which begs the question, where are the promised faster shipping of updates? It has been months since the last one.

I think the changelog should also be posted in Remnote website where you can see the backlinks of issues similar to how logseq does it. It will be great to see the graph of these updates in the long term.

But of course, an update first.

The problem is support is all over the place discord , here, reddit etc it need to be in the one place.
I see people posting in reddit when they should be coming here first.

I would like to see more openness from RemNote showing progress made, change logs, roadmap, accepted feature requestes etc I think people aren’t seeing progress so it needs to be easier to access.

Any update on this @Karthikk ? I didn’t see anything in the roadmap about this.

For now it seems discord posts still largely fly by unnoticed, and many forum posts still have 0 replies.

I can understand that @Karthikk himself can’t always be available, but both the discord and the forum seem less responsive than ever to bugs.

What good is saying you’re committed to better communication, if your actions consistently say otherwise?

Hey! I appreciate you holding me responsible for this

There definitely has been a delay on setting this up, the main reason being me here. When I had committed to this, I had already researched into the right tools and also laid down the basic processes for the team. But I did so as an external consultant for the team. Soon after, I joined full time closing down my consultancy practice as the Chief of Staff (from December; November was pretty stressful due to all the big decision making and subsequent logistics involved). I had to then quickly onboard and take over a lot of the administrative, legal and financial responsibilities of the Company; so that I could facilitate Martin’s attention towards engineering. I have been having some time in the past two weeks and have resumed the project.

Apologies for the delay. Our team has been growing steadily every month and the reason for silence is mainly because of the rapid changes happening internally. Really appreciate your persistence and patience. I am excited for this project to go live myself!