The goals: have as much usable information visible on the screen at the same time as possible and remove any information that is not needed or extraneous visual elements.

User guide: either create individual blocks for each snippet or paste all your chosen ones into a single code block. Snippets that have * after their name have alternatives, pick and use one. Values may be edited to your preference, see the comments in the snippet for details.
Contributor guide: write in the snippet under the appropriate category, matching the formatting of others (name in a comment before the rule, default and other relevant values in comments to the right of the changed value if possible) and leaving a link to the original post if it exists. Ideally, add a before/after image comparison.

12 Likes
Bring back our CSS before 1.4 please!
Large Dialog Boxes, are they needed
Reduce space between Title and Source & Tags?
Too much margin whitespace
Whitespace in editor, please please reduce (CSS workaround in the meantime?)
Changing the font in remnote with css
A wild idea : do a competition for a redesign of the editor
Flashcard Fonts for Disability Accommodations
How to hide alias automatically?
Scroll to Bottom Button at bottom right corner
Change Font e.g. to OpenDyslexic
[Video Tour] (by Beau Haan) Zettelkasten in Roam. Using block references in bulk and keeping all fleeting notes
How can you increase line spacing?
What is Custom CSS and how do I use it?
Need Customization on Daily doc
How can I change the font?
MAB941009 October 2, 2021, 5:54pm #2

Name: Unknown (yet to invent a name

)
Desc.: Reduces the white space between the outliner and the sidebar.

Thanks @UMNiK. I’m with you. Here’s a snippet I created last week to reduce white space between the outliner and the sidebar.

My knowledge base hasn’t exploded yet, so it seems to safe for general consumption. Caveat emptor, still. I’ll continue posting as I figure out more changes we can make to recreate a compact look.

Desc.: Removes “Type / for commands” text on empty bullet points. A side effect is, the “Untitled” text of unnamed Rem is also removed.
Visual comparison:

Not relevant to compactness, instead to further the minimal interface preference.

Tighter sidebar, courtesy of @steveaw . 0 may be a bit too severe, try 1 px as well.

Leaner Bullets
Desc.: This snippet reduces space between bullet points by decreasing the size of the margins both above and below each individual bullet point. The smaller you go, the less white space you have. For example, -6.5px would be even smaller than mine. By default, RemNote (1.4) has these set to -2.5px.
Visual comparison: 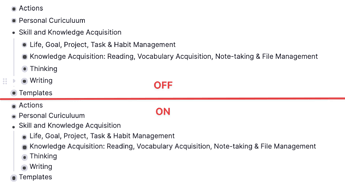 Here’s another. I suspect this one will be of the greatest value to most people. Especially those who preferred the slimmer look of patch 1.3 and prior. 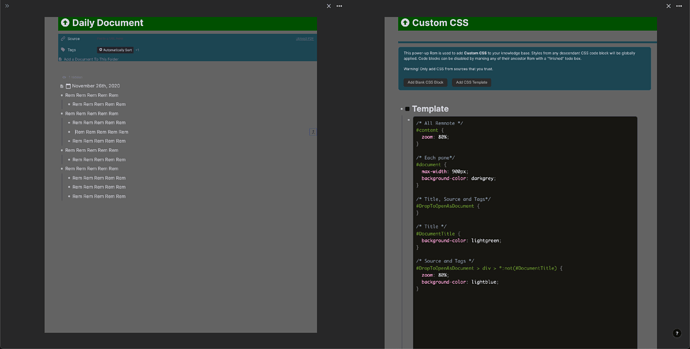