Basically I want to be able to use RemNote without touching the mouse.

In the following I collect what is missing for that and and a few thoughts on how it might be implemented (optimally and maybe unrealisticly).

I invite you to watch how you use RemNote and if you discover something you need to use the mouse for to report it below, if it is not already listed.

Keyboard driven workflow - Are we mouse-free yet?

For me (and maybe other “techy” people) “power-user” features like mouse-free editing is very important. A fast, friction-free editing experience allows users to stay in the flow and output information “at the speed of thought”.

Vision - How could RemNote be improved?

Some actions can not be done with keyboard yet. Some have no easy action and require multiple keystrokes or too much thinking.

A view things require multiple keystrokes (like deleting a Rem = select -> del). These things don’t require a shortcut immediately, but would be useful as unbound commands to help customizing a workflow.

Here is a list of things which can’t be done with keyboard yet.

I like VSCode’s approach to have the shortcut trigger on the same physical buttons on all layouts (e.g. Ctrl + Alt + button left of 1) and display the actual required characters to type based on the keyboard layout (Ctrl + Alt + ^ on QWERTZ and Ctrl + Alt + ` on QWERTY). This is not trivial.

In the same spirit, there should be some improvements made so that you can navigate the queue mouse free. I already made one suggestion Add keyboard shortcut to exit/enter the "type your answer" box and thought of another one: if you click on the show metadata shortcut and then press it again, it should remove the pop up.

Amazing post ! The idea of adapting Vim Easymotion to Remnote is an absolute game-changer.
Some shortcuts i’m thinking of :
Go to Queue
Done Editing in Queue like ctrl+enter in Anki

I’d like more ways to control/navigate the hierarchy fold state using the keyboard. Here’s an initial list I thought up. Suggestions, comments and corrections are welcome! Set/change global fold depth for current Document - ALT+0-9: set folding depth for the entire Document - Ex: ALT+0 would be the equivalent of what currently can be achieved by (1) selecting the title of a Document, (2) CTRL+UP and then (3) CTRL+DOWN - Would also be good to have shortcuts to increase/decrease global fold de…

Good idea! I support that.
Would make work much easier, or even possible, not only on the PC, but also on a tablet.

need a keyboard shortcut / hotkey to preview flashcard for the rem, where the cursor currently is at; instead of moving the mouse to hover over the preview button area. To close the preview, just any other key could be pressed.

link to post on same topic in Community Q/A


also I’d like to be able to scroll using keyboard(arrow keys or PgUp/PgDn) while in queue; which doesn’t seem possible at the moment. I feel this need in cases where answers revealed need scrolling
kky January 26, 2021, 6:45pm #7

I don’t think it was listed but a shortcut for

Right now I think my only option is to double click.

It seems that theses ones already exists.

any update? I really need some shortcuts! thx!

Does this help at all, @jackiexiao?

^Those already work. I agree that more shortcuts (and smartly done) will be needed tho.

thx for your reply!

Here’s something that would be useful for me: ability to define shortcuts to specific documents/Rems. (like ALT+D is to Today’s document)

I have a “home Rem” where I go to very often, with tasks and links to projects I’m currently working on. Every time I want it, I need to use the trackpad to click on it on the sidebar (annoyingly, it’s still slightly quicker than doing CTRL+P, typing first letters of its name, then hitting enter).

Would be good to be able to define a custom shortcut to that.

Even better if I could do this for multiple shortcut/Rem combinations (for other Rems I use often).

Another suggestion: have CTRL+\ (navigate to Parent) also work for the Rem currently open (considering, of course, it has a parent).

Example below: if I am in the Apps Rem, and want to navigate to its parent (Time-tracking), I need to use the trackpad and click on it.

You can zoom out with Ctrl+;

True! Good to know there is this shortcut. Thanks

Still, shouldn’t CTRL+\ do the same if the title is in focus? Seems intuitive.

One more suggestion: to be able to use ESC to dismiss UI in more contexts.

Sometimes, while using keys to navigate between rems etc., the right-click menu of references is triggered (for example, when going up a few rems using the ↑ key to a rem that is only a reference, e.g. the Aliases reference). As of now, there is no way to exit this besides clicking somewhere else with the mouse. It would be much more convenient to be able to exit this menu using the Esc key (same as for exiting the / menu).

I agree! I do the same thing (I call it my START page for my “home” view), where I collect references to various projects I’m currently working on, as well as random todos that I want to carry forward until done.

I use autohotkey for various things, so I made a little autohotkey to pull up my START document and daily docs in facing panes. It would be nice to be able to do it easily just with RemNote, however, by defining a shortcut key to a specific document/rem as @ognsya suggests.

Which gives me this. 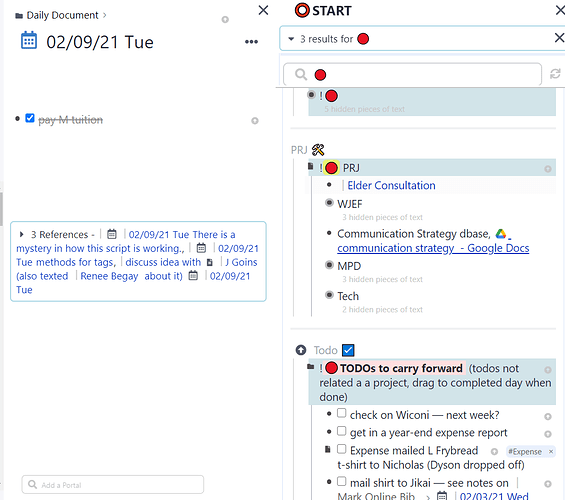 In general, I have mixed feeling about all the RemNote hotkeys. There are just so many of them I can’t remember them all. I’m glad there is the / menu, and I wouldn’t be opposed to an old school top menu driven by ALT and the first letter of each menu term as you step into it. I hate “ribbon bar” menus, so I’m glad RemNote doesn’t use those. I’m also glad that autohotkey seems to override the RemNote hotkeys, since several of my autohotkeys are also used by RemNote.

You could just use escape or cmd+. to close the popup. Didn’t know this as an iPad user because we don’t have a dedicated escape button

“Vim is not a text editor its a way of life”

But on a serious note, since I started using Vim I find typing in any other editor excruciatingly tedious. This feature would be a godsend.

sometime I accidentally create a document(ctrl + enter), I would like a shortcut to delete current document, also a search for shortcut would be better