There were many Discord Suggestions asking for improved formatting options

While these are important features for RemNote 1.0 they are tedious to design and implement.

Adding the (normalized) tag names of a rem as a CSS class is easy to implement and provides a flexible solution for rem-level customizability. Example use cases include:

Most of this got implemented in the November 2020 update. There are still a few things QoL things that I’d like to see. This list is WIP. I’ll add things when I find them.

Table / spreadsheet functionality
What is Custom CSS and how do I use it?
Arrow bullet styles
How To Add Vertical Divider similar to notion?
How to do a (feature) comparison in RemNote
WIP: Table Layout
How Are You Taking Notes?
WIP: Stable Markup: Show Tags
Let slots inherit tags, including "Extra Card Detail"
Custom alphanumeric list rem options
Community Project: Modular CSS Theme
Can we have kanban board?
Why "two" references show up in one reference? (Hide path before reference)
Can we have kanban board?
Why are the comments of each post in this forum not displayed in the order of publication?
Calling all devs in the Community 📢
Guide: data attributes
[Poll] Should we further improve the markup?
Documentation on November CSS updates?
Tags vs. References. When to use what?
Quote a sentence inside a rem to another page
Table / spreadsheet functionality
/hide parent command?
matleonii October 4, 2020, 4:47pm #2

this would be super cool to have! I think it fits much more in the Remnote workflow than this text editor “basic” features

Turns out we already have that, oops 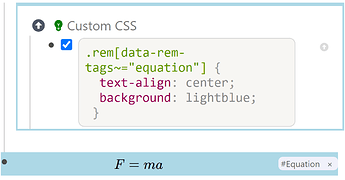 Why did I not know this?!? We should make documentation.

Have you tried font-size?

FONTSIZE?? What do you mean???

11 Likes
Bibliography reference management and automatic footnotes when copying and pasting from a website
Best way to convince my student friends to try RemNote?
LaTeX package support
ognsya February 5, 2021, 10:15am #6

Hahah. That was amazing. Good job!

you took it to the next level!

Would you mind sharing the Css code?

Haha, that’s amazing! how do you do that?

For those wondering: I made these by injecting some JavaScript into the page fixing the markup. You can do this e.g. with https://violentmonkey.github.io/, but it does not work well with Single-Page-Applications so we need a native implementation. Or Native Plugins (Custom JavaScript) for that matter

Also bumping this to the top of Latest

Great job as always! Goes much beyond simple “formatting” - that’s full on “styling”!

Would be great if this could be coupled with the existing templates functionality. That way, if I tag a Rem with #person, for example, not only I get the slots for that (Name, Picture, Phone, Address etc.), but also these slots appear in a certain layout (for example, picture on left, info on right).

I think RemNote would greatly benefit from allowing content to be structured like that (after all, slots are already like variables), and endlessly leveraged to do all kinds of things. Especially once queries get more powerful.

Not long ago I got really into Tiddlywiki, which allows a lot of customization and complex queries. Too bad it has very limited/awkward editing/formatting experience. RemNote is the opposite.

Anyway, I digress. Great experiments there! Keep it up!

Thanks for the comment. This is a great idea! I updated point 2 above. Turns out that RemNote already records TypeParent-TypeChildren relation in rem-data-tags. I’m pretty sure now that this is what they are for in the first place, since tags are RemNotes typing/inheritance mechanism. I makes sense now that tags are applied transitively as well, i.e. having Book #Publication and How to Take Smart Notes #Book lists the latter as #Publication as well. It is buggy though.

@ognsya Could you please post a person template of how you would like to have it styled? I would like to try that. I am taking from your comment that you had it customized in TiddlyWiki already?

@hannesfrank I did implement some stuff in Tiddlywiki, but I don’t have it anymore…

I don’t really have any specific layout in mind for this… I just used #person as a basic example of the benefits of styling. Different data structures could benefit from other layouts, of course. Ideally RemNote will allow any user to create their own, via some simple scripting/styling language (possibly via the plugin system, I guess).

Your Pros/Cons proof-of-concept is a great example of that - it’s simple, but very helpful, since it provides such a specific functionality.

Well, here is a pure CSS person template for RemNote:

Nice! I hope RemNote devs are keeping an eye on everything you’ve been doing.

Wow, these examples are incredible @hannesfrank!

For “Allow to add and remove tags via the API”, what flow did you have in mind for allowing you to add tags via a shortcut? The only flow I can see here is 1) trigger a popup plugin with a keyboard shortcut 2) the plugin adds a tag 3) the plugin closes itself.
What do you think about providing an option to directly link keyboard shortcuts with tags, instead?

We’ve implemented these changes so far - am I missing any particularly important ones?

For “Allow to add and remove tags via the API”, what flow did you have in mind for allowing you to add tags via a shortcut? The only flow I can see here is 1) trigger a popup plugin with a keyboard shortcut 2) the plugin adds a tag 3) the plugin closes itself.

Yes, that is exactly how I imagined a plugin could work. A native implementation to add/toggle tags using a shortcuts would be even better of course because it eliminates the loading time. I would still love having more things exposed for programmatic access. I wrote a bit about that too and maybe post this later (think: everything is a remcommand, like in modern text editors).
For example there might be cases where you want to cycle through 3 tags with a single shortcut.

For now one can also use auto(hot)key or something similar to associate a tag with a shortcut. So it is not super high priority on my list. You can not remove the tag again though.

We’ve implemented these changes so far - am I missing any particularly important ones?

Yes, I think you got the highest value/time ones! Thank you very much!

Having the normal and focused markup play nicely together is hard I guess because it is created by the slate editor. That would be my next wish. Maybe you could at least leave the hover markup unchanged for now?

Here are some more wishes which make styling for active recall practice easier:

I’ll report back when I find more stuff that can be improved.

Thanks @Martin for replying!

@hannesfrank This looks amazing. Thank you!
But missing the part that how do i implement it?

I’ll release it as copy&paste and/or tutorial when Martin rolls out the changes described here.